Side Raises $150M At $1B Valuation To Help Real Estate Agents Go It Alone. 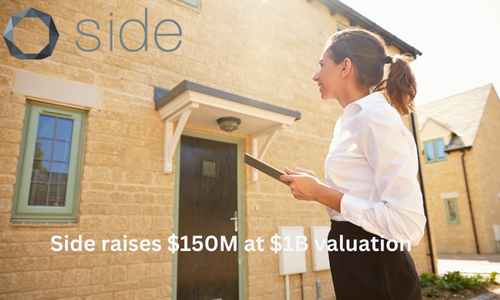 Side, a real estate technology firm that strives to transform agents and independent brokerages into boutique brands and companies announced a $150 million Series D fundraising round on Monday.

Coatue Management led the round, bringing Side’s valuation to $1 billion and total capital garnered more than $200 million since its founding in 2017. Existing investors Matrix Partners, Trinity Ventures, and Sapphire Ventures also contributed to the fresh round of funding.

Side, Inc. was created in 2017 in the San Francisco Bay Area by Hilary Saunders, Edward Wu, and Guy Gal. This company was founded on the idea that most real estate salespeople are underappreciated and underpaid by traditional brokerage structures. Side promotes independent brokerages, teams, and real estate agents as 100% agent-owned enterprises and boutique brands. They give them the necessary proprietary technology and support staff to assist them in succeeding in business, enhance productivity, increase transactions, and focus on serving their clients. The side now serves over 1,500 partner agents and employs over 300 people.

The sum raised in this round is much greater than the $35 million Side raised in a Series C investment in November 2019. The valuation climbed roughly seven times above the $150 million valuation at the time of the Series C. Sapphire Ventures spearheaded the investment, and Sapphire Ventures managing director Paul Levine, who was previously president and COO of Trulia (before its IPO and multibillion-dollar acquisition by Zillow), he joined the firm’s board members.

In 2020, the business hoped to make between $30 million and $50 million in revenue and expects to treble income this year. Side represented more than $5 billion in annual house sales across all its partners in 2019. Today, the company’s network of agent partners accounts for more than $15 billion in yearly manufacturing volume.

Guy Gal, Edward Wu, and Hilary Saunders created Side on the assumption that traditional brokerage models “underserve and underappreciate” most real estate brokers.

Side’s white label concept works with agencies and teams to market their boutique brand exclusively while providing the necessary technology and back-end assistance. The purpose is to assist partner agents in “predictably growing” their businesses and increasing productivity.

“Think about Side the same way you think of what Shopify provides for e-commerce… “By collaborating with Side, top-producing agents, teams, and independent brokerages obtain full ownership of their brand and business for the first time in history,” Gal said. “After years of solving the challenges of this specific community of agents, you can utilize software to drive massive efficiency for them in a way that has never been done before.”

Existing brokerages, he claims, intentionally discourage agents from becoming top producers and teams since agents who serve fewer clients might be required to pay significantly higher commission rates on every transaction, resulting in a misalignment of incentives between brokerages and top agents and teams.

“Leading producers want to distinguish and expand, whereas brokerage firms want them to do less commerce at increased prices and be more of the same under a single brand,” Gal stated. “Rather than deterring and fighting with top-producing agents and teams, Side enables them to build and develop their own business and brand.”

The side now serves over 1,500 partner agents in California, Texas, and Florida.

The business intends to use its new funds to make “substantial hiring” and to expand beyond the three markets in which it currently operates: California, Texas, and Florida. It also intends to add another 200 staff to its 300-plus workforce.